Oil City Pickups: Joe Barden ... the rewind from hell 2 (in the workshop no one can hear you scream)

OilCityPickups Frets: 5384
March 13 in Made in the UK tFB Trader
Well four years after I did the last photo story about a Joe Barden rewind: here I am again. I thought it was an interesting thing to post this job as there have been some changes to the way Bardens are made ... and I wondered if my original criticisms about the construction of the last pickup were still valid. 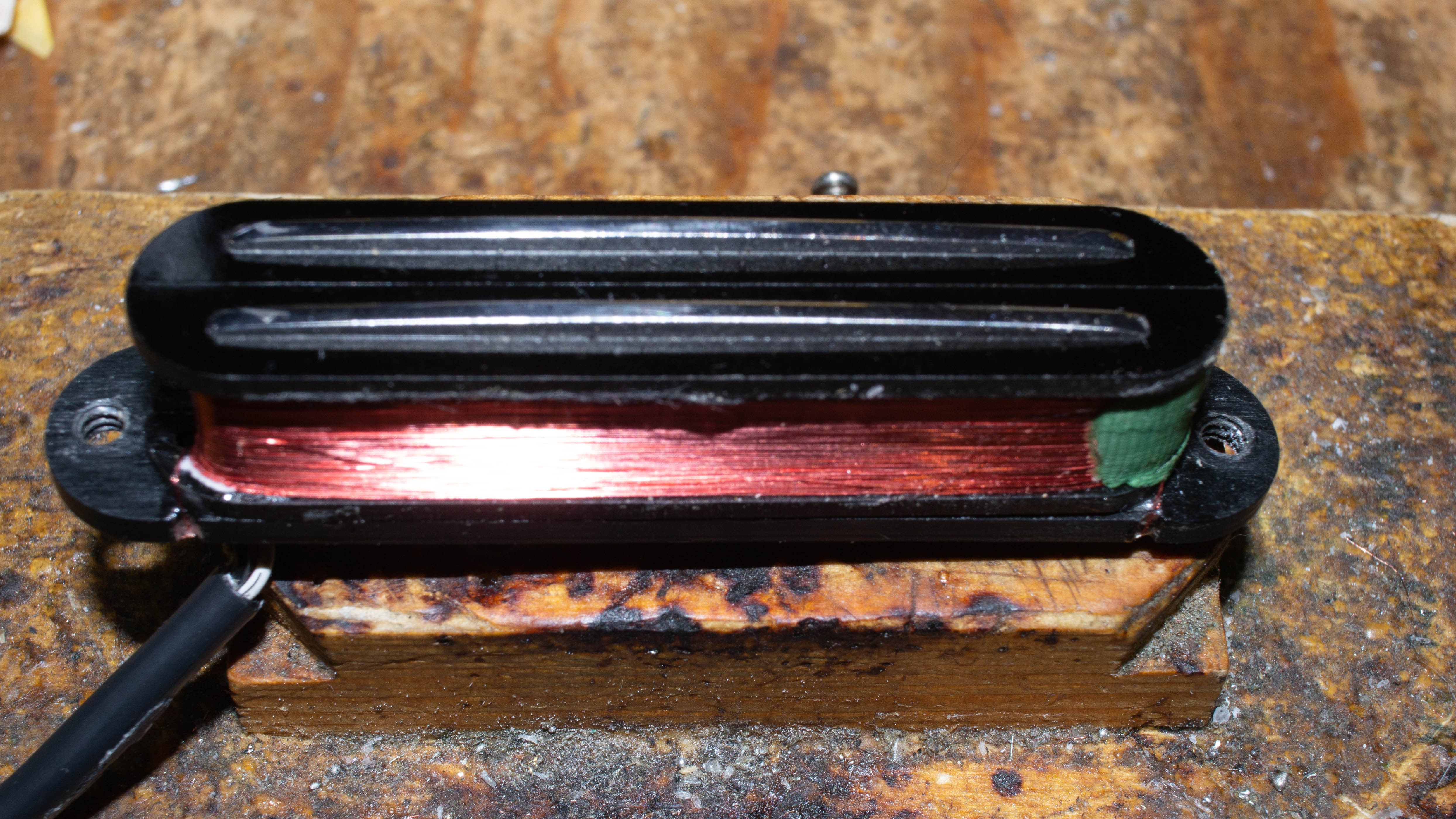 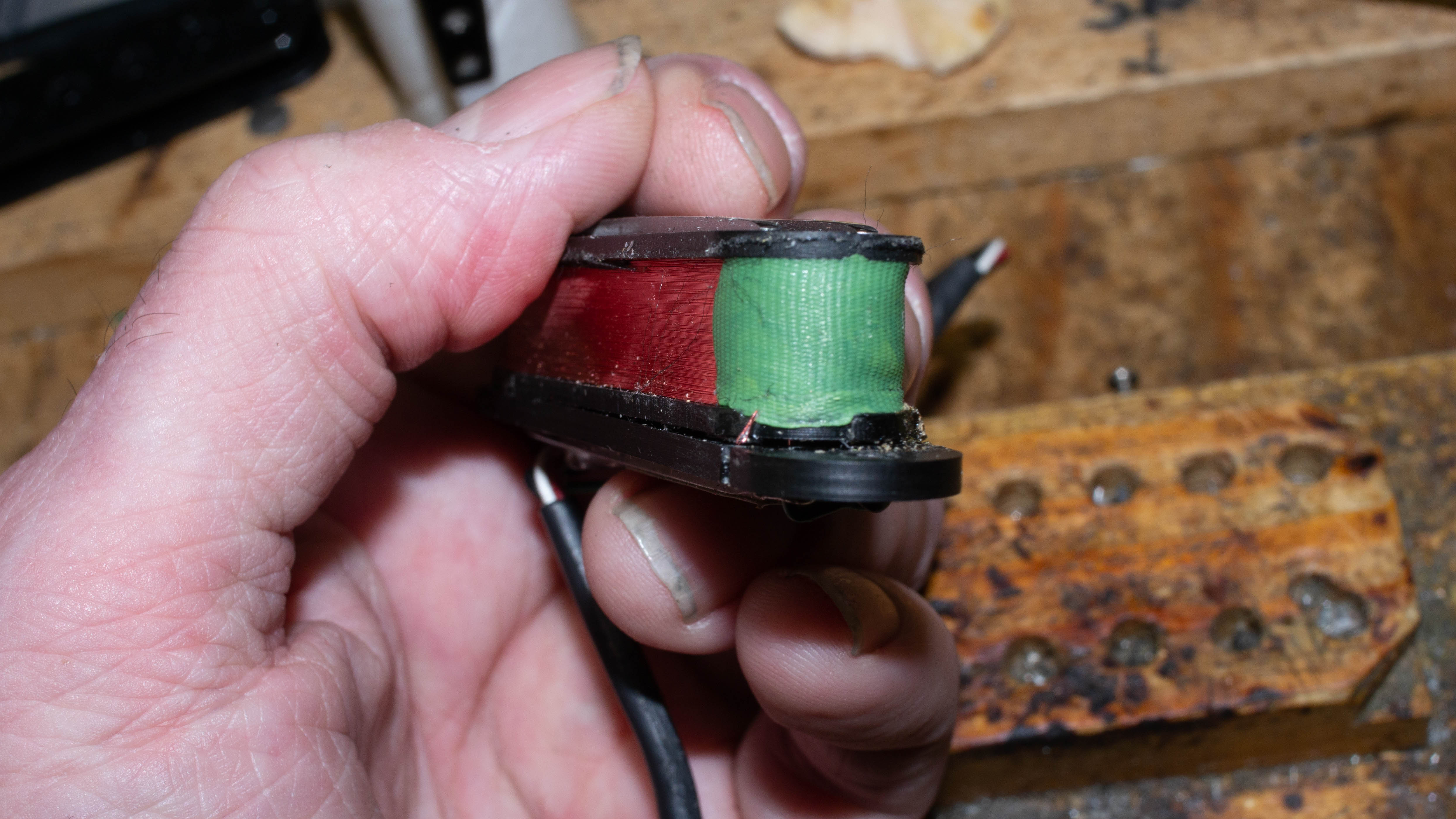 Here's that horrible epoxy putty again ... this time I can't get a reading out of either coil ... hummm
None of those odd pins that the core wires were soldered to this time,  instead the winding wire is looped between the eyelets on the baseplate and the holes in the top bobbin flatwork. 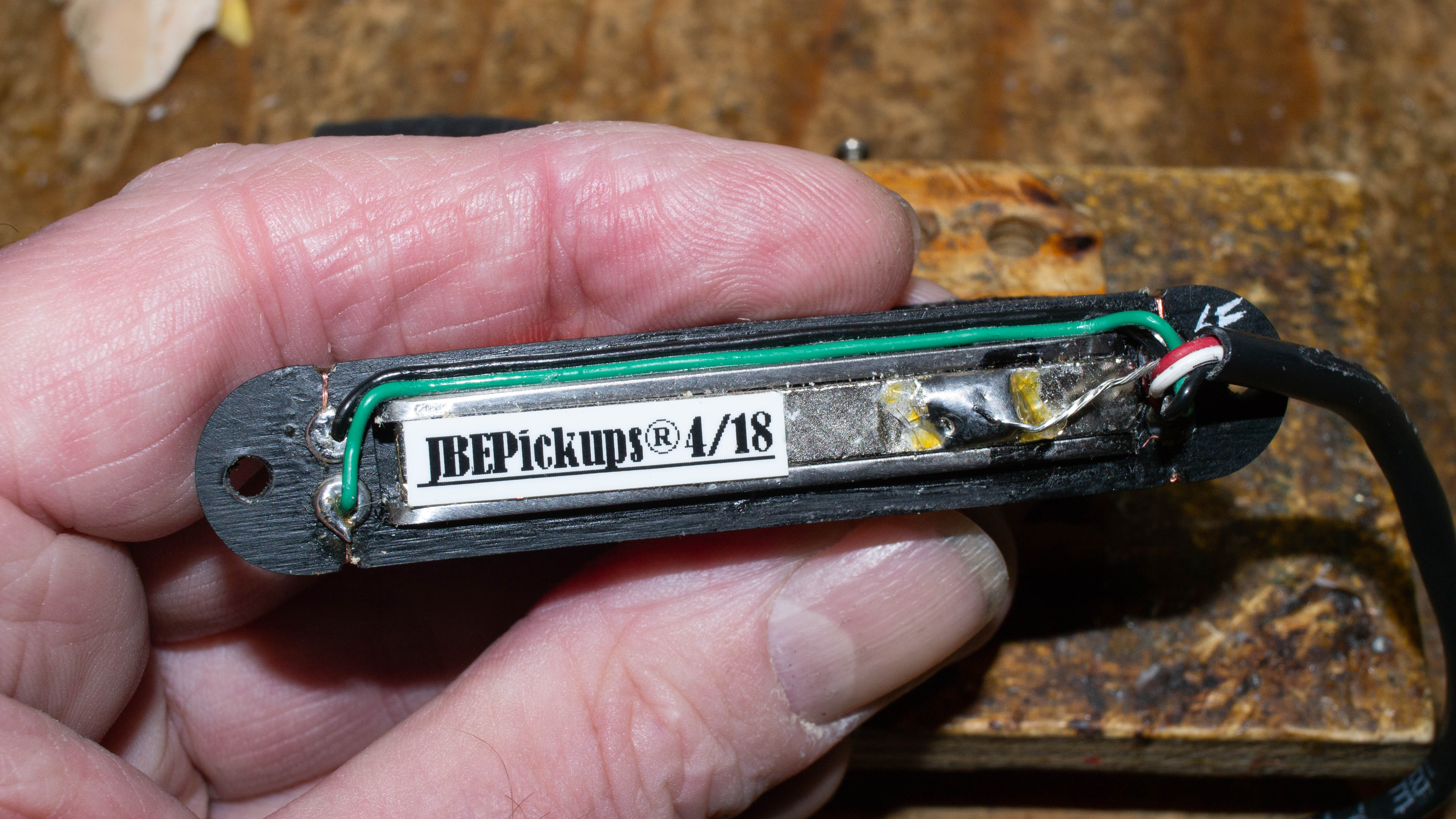 Hummmmm here the black and green wires are actually superglued to the baseplate ... meaning they are destroyed as you remove them. 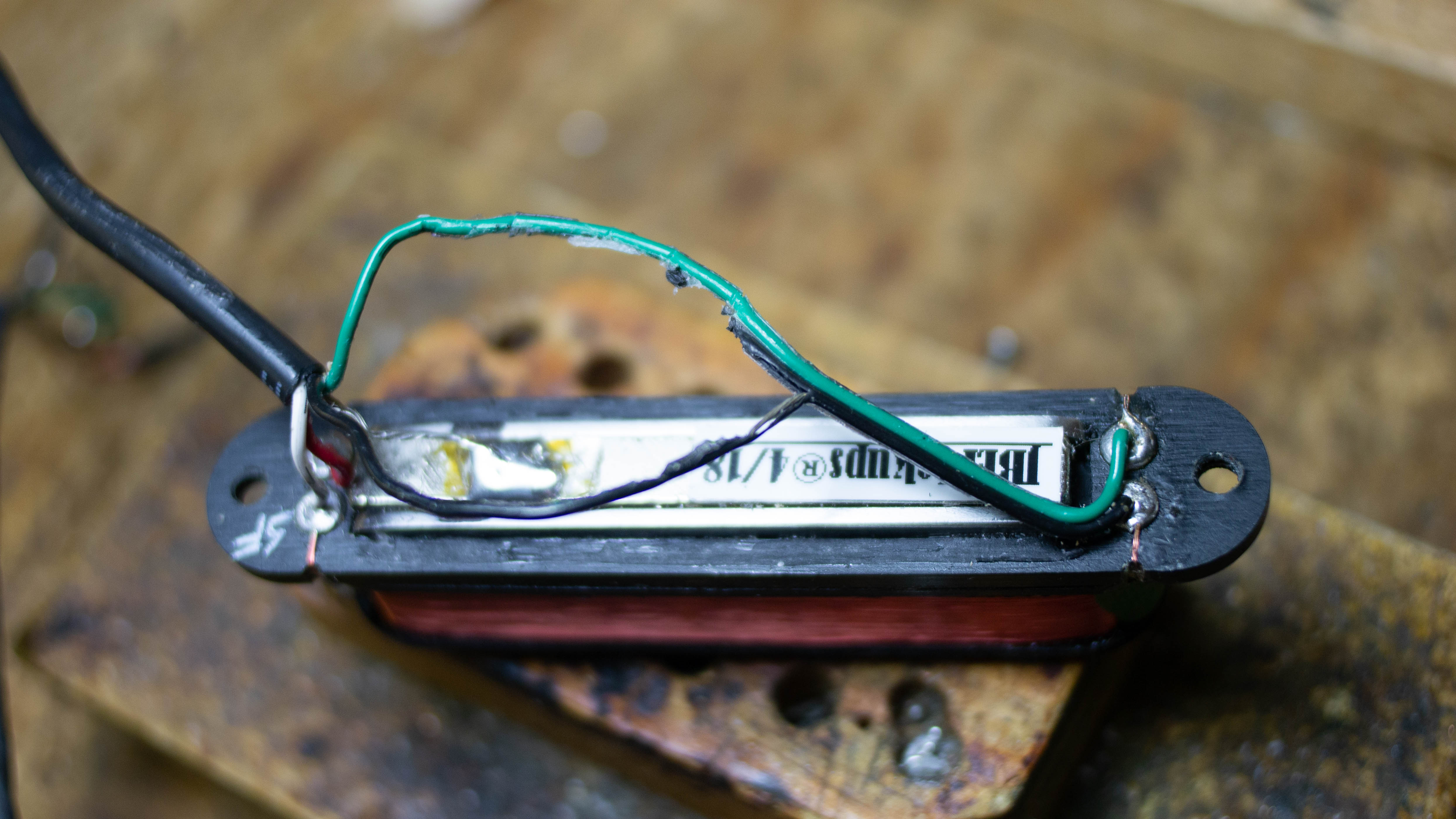 Here is a possible reason why the pickup died ... the iron core has been coated with what looks like epoxy ... but either that wasnt allowed to cure properly before winding or other glue has been over liberally applied when the pickup was assembled. Whichever way the wire is firmly stuck in a glue soaked and hardened mass at the top and bottom of the bobbin and because the glue is brittle ... any movement of the bobbin halves or a hard knock might cause the wire to break along with the glue.
Anyway it's a total bastard to get the remaining wire off and clean the bobbins up! 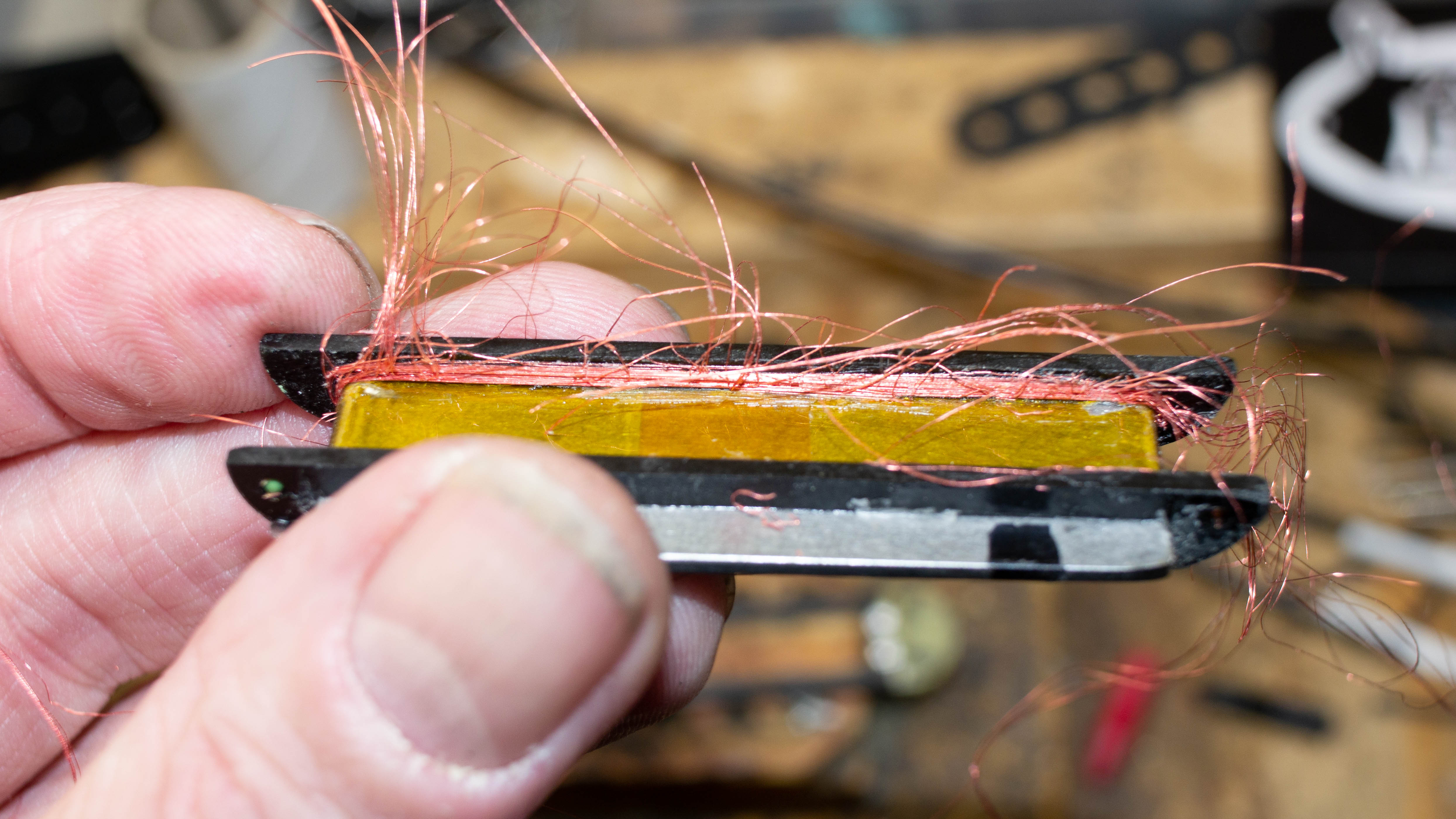 At last I cleaned the pickup bobbins up ... and even had some red Elektrisola wire from the USA that matched. 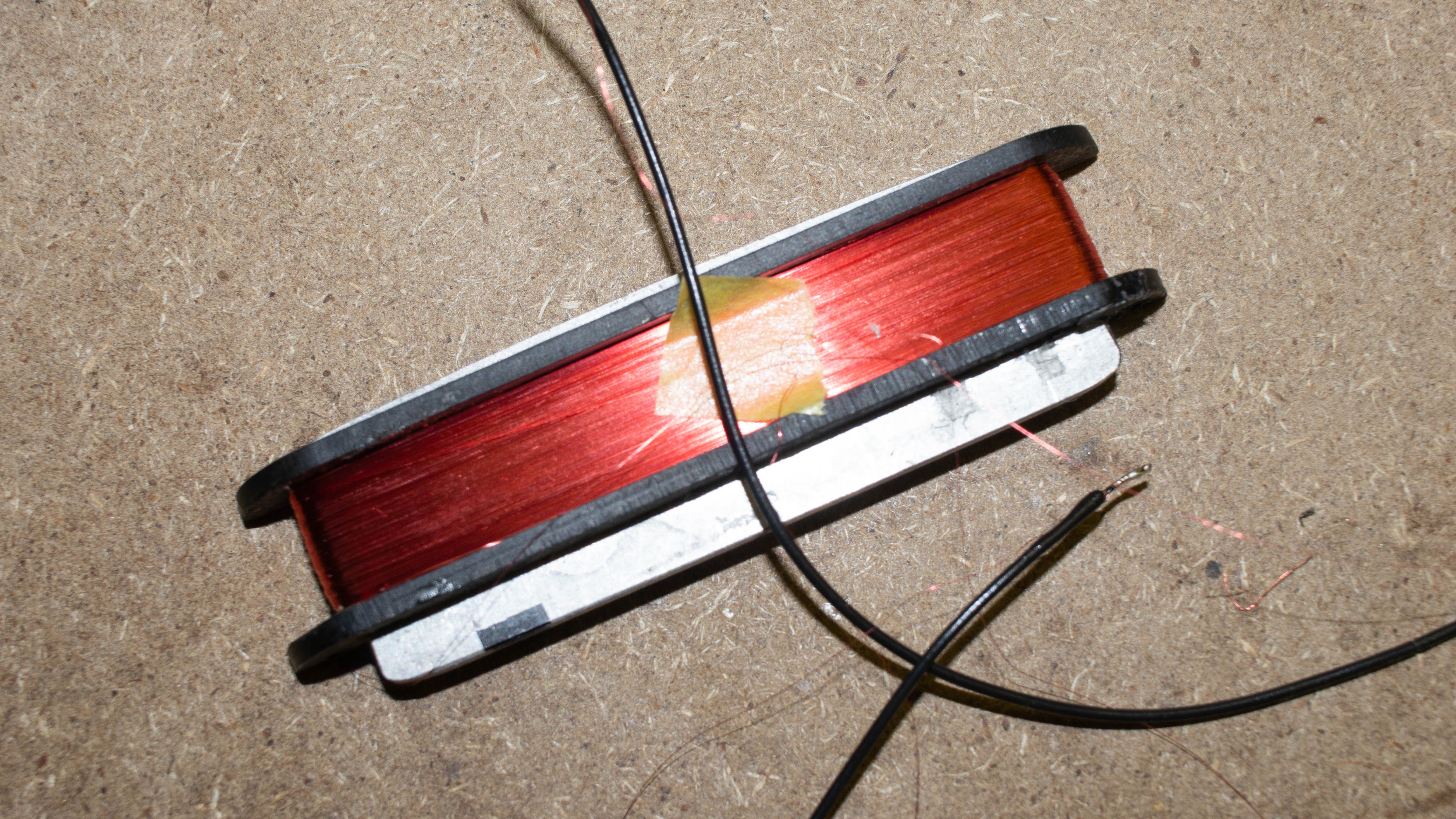 All rewound ... the black wires are only attached to make it easier to use a meter on the coil ...
And potting 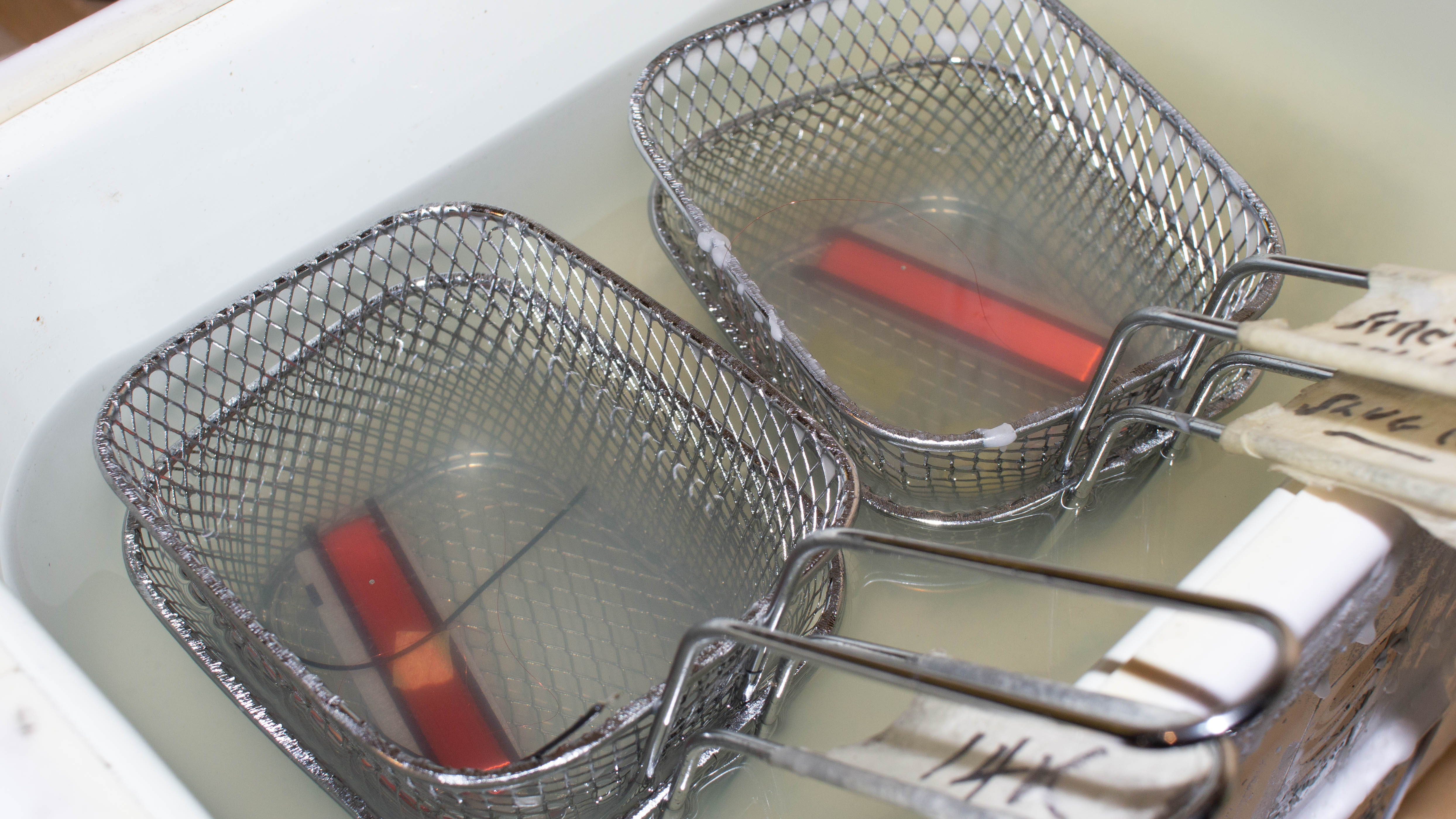 The magnet now appears to be nickel plated and very powerful ... so I'm guessing a change has been made from the earlier ceramic to Neodymium ... as far as I know the only magnet type that comes nickel plated. 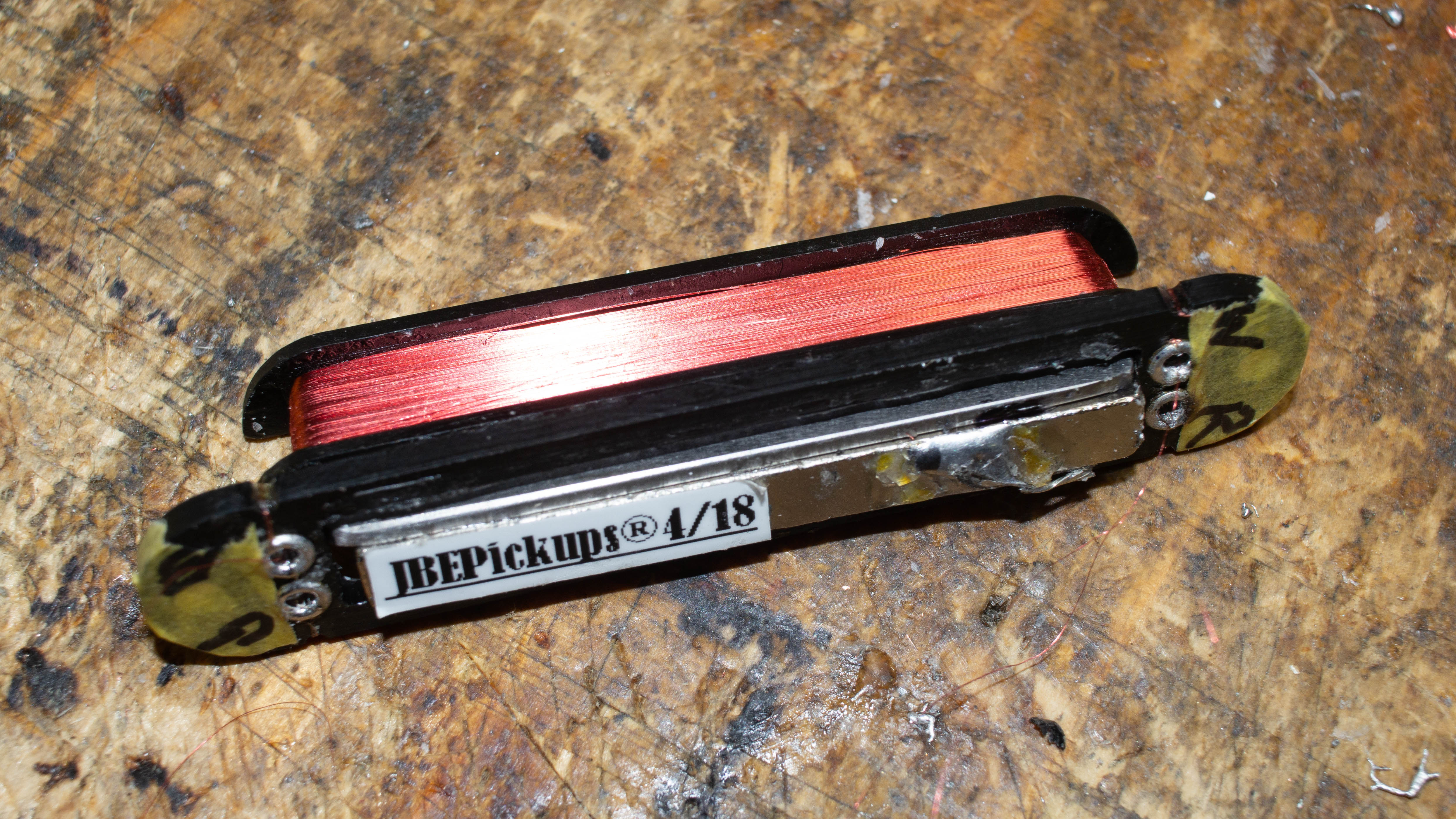 reassembly ... you can see how the winding wire is looped through the eyelets ... this is a bit of a weak point again, as any movement between baseplate and bobbins could sever the wires. I've added a bit of slack and used an elastic glue rather than a brittle one in putting this back together, so hopefully it won't go again. 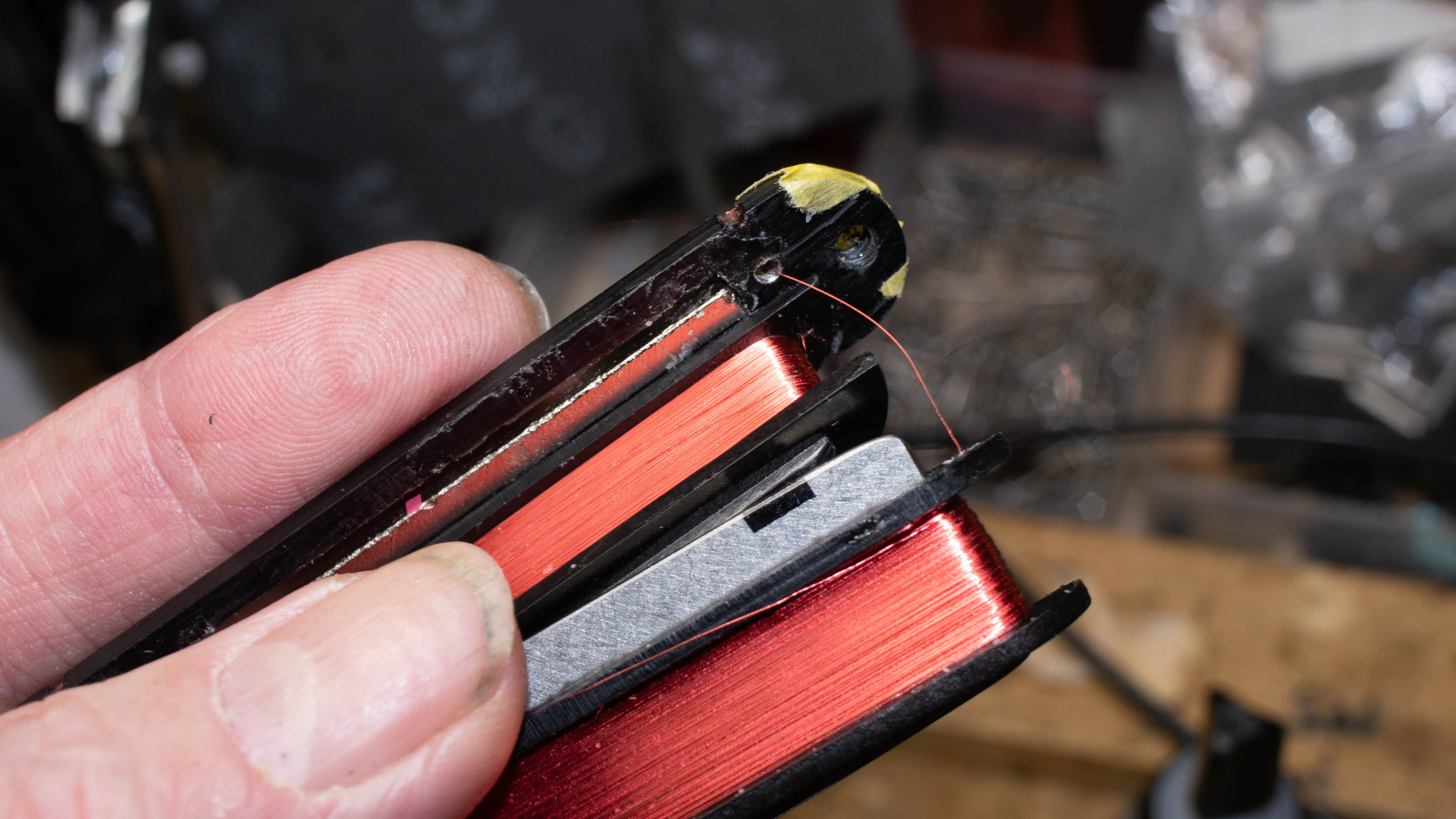 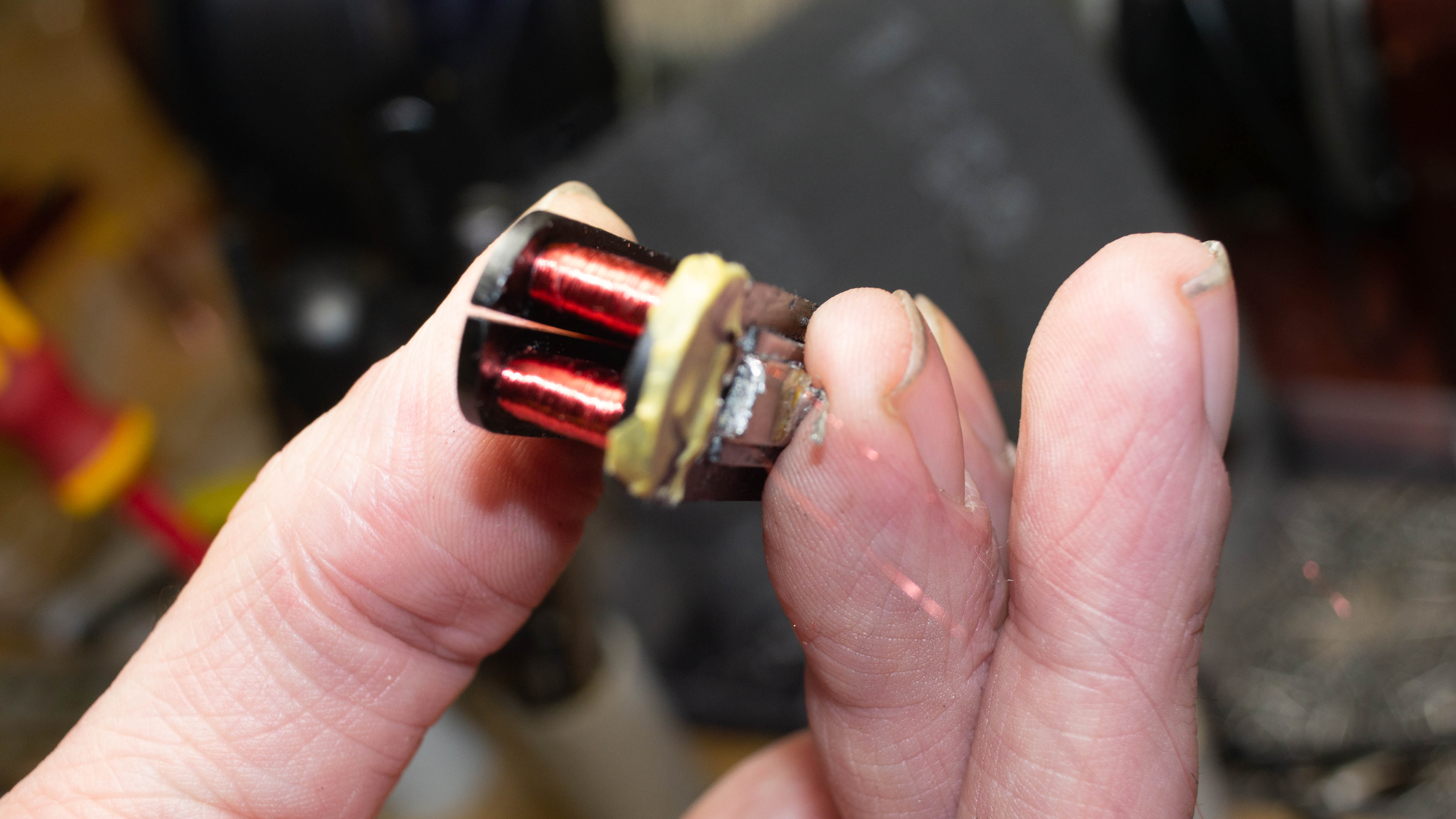 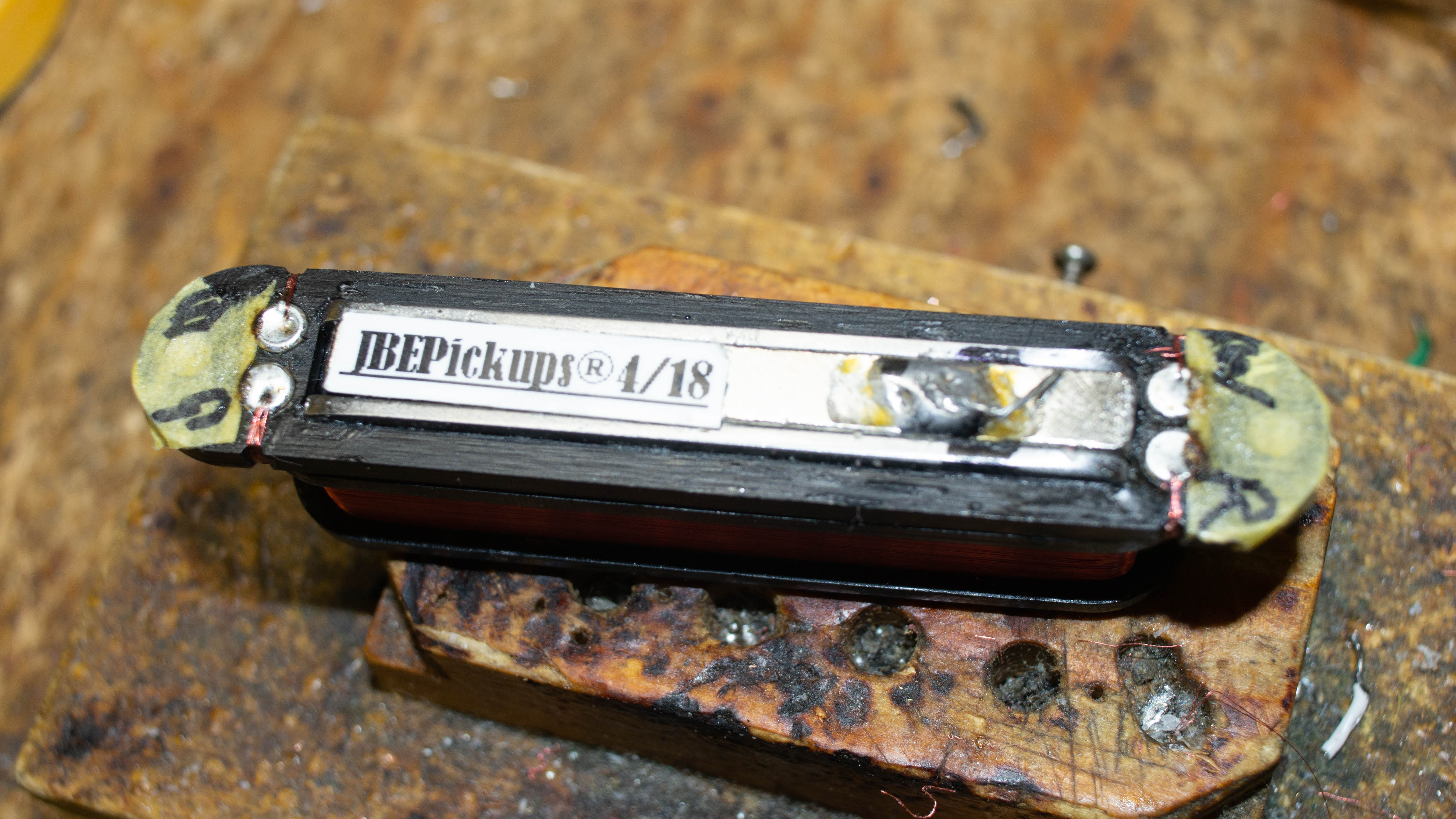 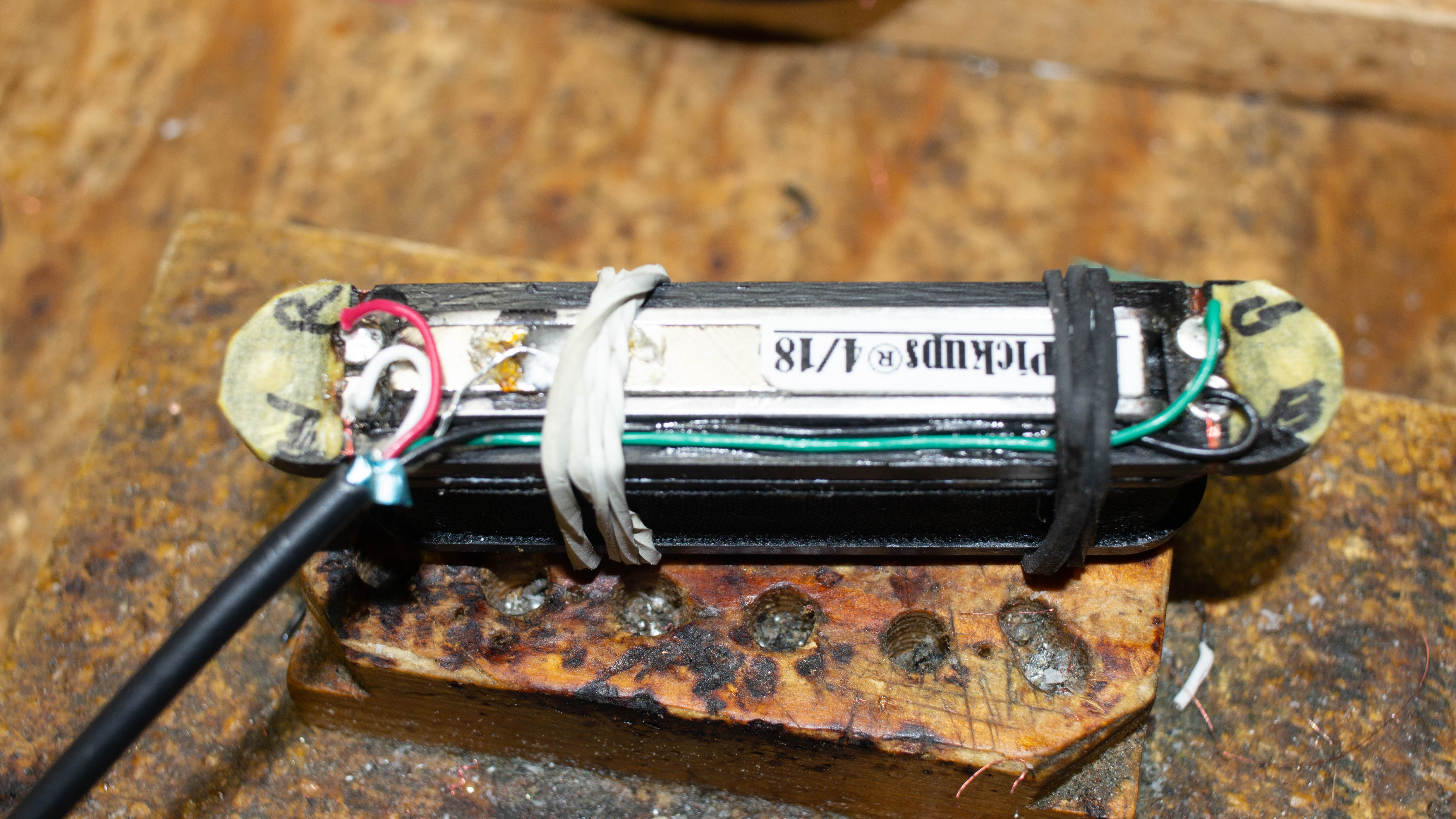 Finally new output wire is attached ... I used an elastic glue to fix down the black and green wires so that removing them again for any reason shouldn't kill the output wires again!

Well all working and ready to rock again.