FS: various guitars for sale, and maybe an amp or two. 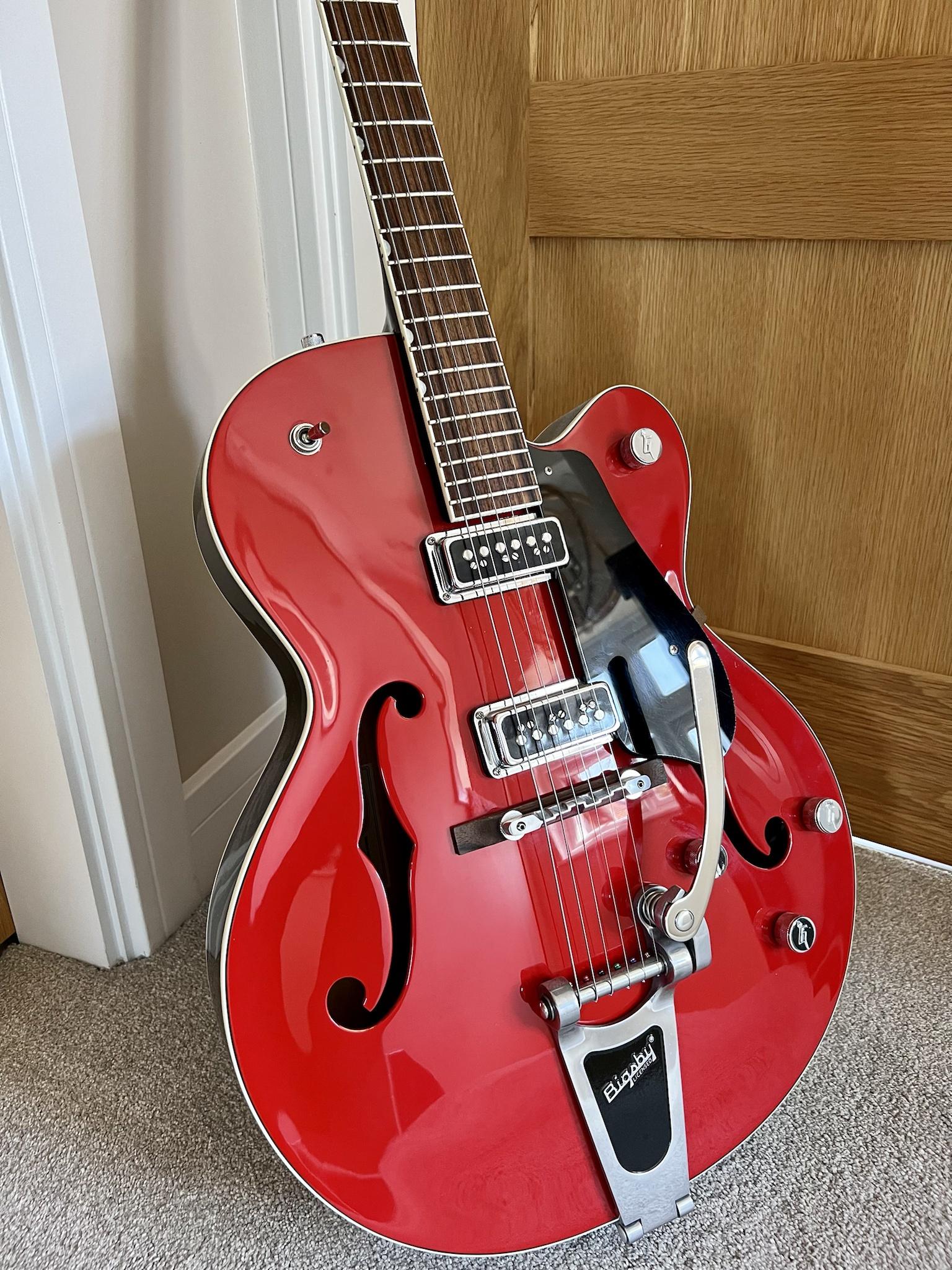 This has been well looked after with only a few tiny blemishes around the headstock.
I’ve had this guitar regularly setup, and it got a good fret levelling and polishing when I first bought if.  It’s a lovely guitar. It’s currently sporting a set of 11’s, strings are ‘groundwounds’.  Round wound ground flat to feel like Flatwounds- a great halfway house between roundwound or Flatwounds, without being too flubby on the bass. will supply a fresh set of groundwounds or round wounds as buyer wishes.
Original tuners were a bit pants, so I bought a set of Klusion locking tuners that fit the exact footprint of the originals, and has them professionally installed.  Hold tune superbly. Original tuners included in sale.
These (all models) came from the factory with the pickups set way too low, leaving the guitar sounding a bit thin and weedy.  I purchased a few sets of shims from TV Jones, now the pickups ride at the correct height. This thing sounds pretty damn astonishing. These DeArmond 2000 pickups are just spectacular, and really capture that twangy 50’s Gretsch sound, while still being able to deliver modern contemporary tones.  Think of it as a fat 3D sounding Telecaster. Pickups are super articulate, and great if you love your pick dynamics.
Pickups sound 95% the same as Dynasonics.  Dynasonics maybe have a tad more thickness in the mids, but you would struggle to tell them apart in a blind test. To be honest, this guitar sounds better than my 6120.
Neck is lovely, wide with 12” radius and super comfortable. A fuller Fender C profile.
I have no hard case for this, I’ll dig around the garage, i may have a gig bag for it, but haven’t seen it for a while, so will have a look. Might have gone elsewhere.
This model (5129 or 512x) was made in three version. The first one has the neck set at the wrong angle, and came with a B70 bigsby.  Best avoid that one.
The second version has the neck at the correct angle, but has oversized F-holes. Lots of people reported weird neck vibrations at volume.  This is the final version (2008 onwards), and has zero issues and is by far the best version to get.
It’s fully hollow, with a little bracing under the bridge, so is very lively, with great controllable feedback.
I honestly adore this guitar, but need to make some room, so is the first of several guitars I’m putting up for sale.
£550 collected from High Wycombe for the best sorted G5129 around.  Happy to meet at a services within an hour drive.  I also work near Cambridge a few days a week, so often driving along M25 and up the M1. Happy to make detours if that helps.   Also driving up to Liverpool in early July if that helps, so delivery (to some extent) could be possible.
Thanks for looking