MrBump Frets: 1132
February 2019 in Guitar Reviews
This was a long review, but I've just cut a load out because I was 700 characters over!!!

Maybe I'm weird, but ever since I started playing the guitar in the late 1980's I've always wanted to own a Gordon Smith guitar.  I like the back story behind the brand, I like the aesthetics and company ethos.  I was a fan of Billy Bragg back in the day, and remember the god-awful sound he used to get from his guitar.  Reports of variable construction quality didn't really bother me, as people told me that when they made a good 'un it was really good!

I'm not much of a humbucker person, so when my wife said I was allowed to get another guitar, it was always going to be a strat.

After a Facebook chat with Pete at GS, I decided to take a day off and travel up to Northampton to try out a few of their instruments.  The whole interaction with the company was really positive, super friendly.

The workshop/showroom was pretty much what I expected... very small workforce, but some nice examples of mostly Gibson-esq guitars hanging on walls in their showroom.  The closest to a strat they had in was a really nice tele - that guitar showed me that the build quality, finishing and sounds were easily comparable with Fender/American made guitars I'd been testing, so I placed an order.  Estimated build time was 8 weeks.

The spec was a Gordon Smith Classic "S", roasted maple and ebony neck, swamp ash body, finished in Nene Blue.  "Nene Blue" is a misnomer; I used to live near the river Nene, and it was never as pretty as this guitar.  I added in stainless steel frets to the order (as Shakin' Stevens' guitarist was in the showroom at the time, and he convinced me of their worth...), plus locking tuners.  Total was around the £1.5k mark.

After just a week and a bit I started getting drip fed info from Pete via Facebook about the progress of the build, and then he messaged me this: 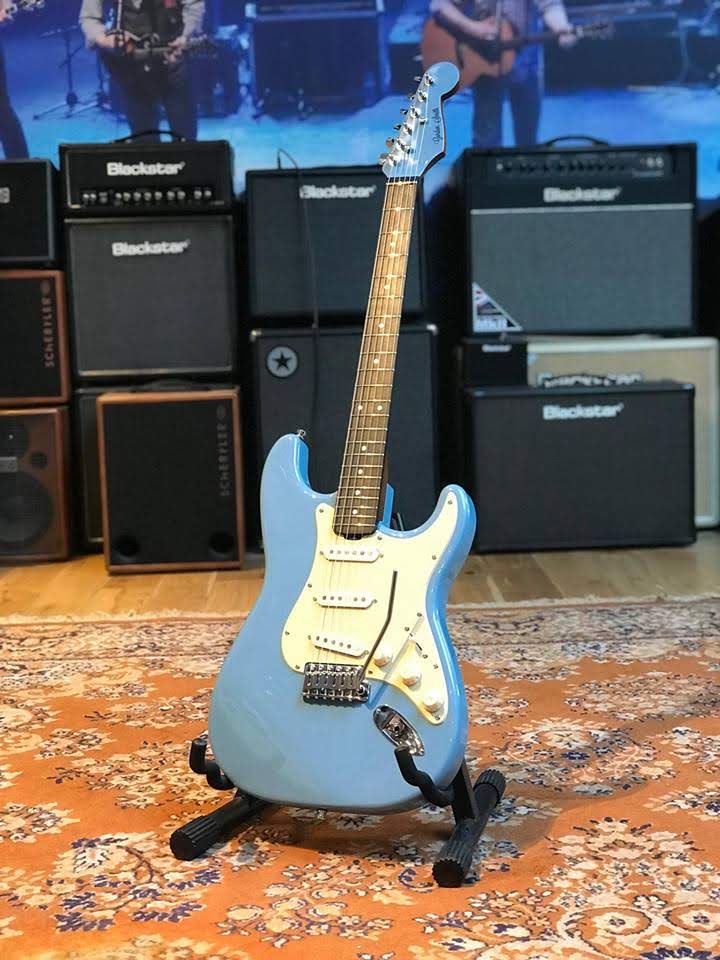 Another day off booked, and another couple of hours up the road to Northampton, and the guitar was mine. 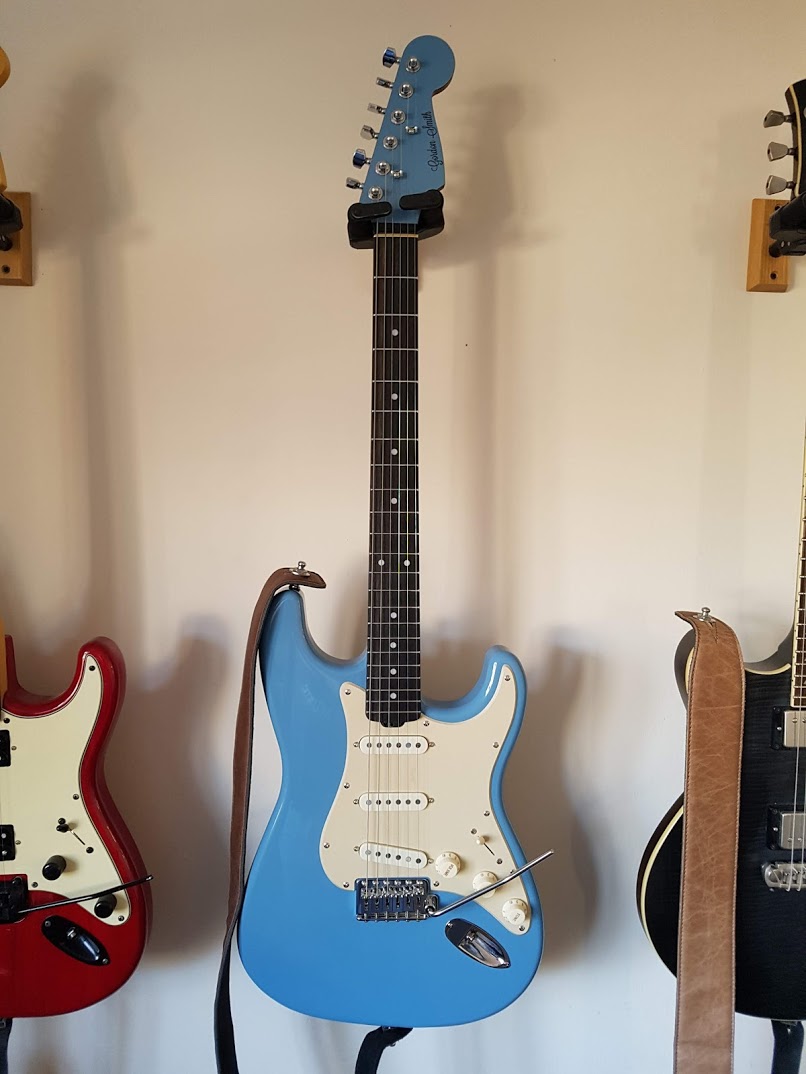 Firstly, the build quality is superb.  First impressions were really good, no obvious blemishes with the finish, everything was tight and aligned.  The neck felt amazing, one of the best I've played.  And the roasted flame finish was lovely. 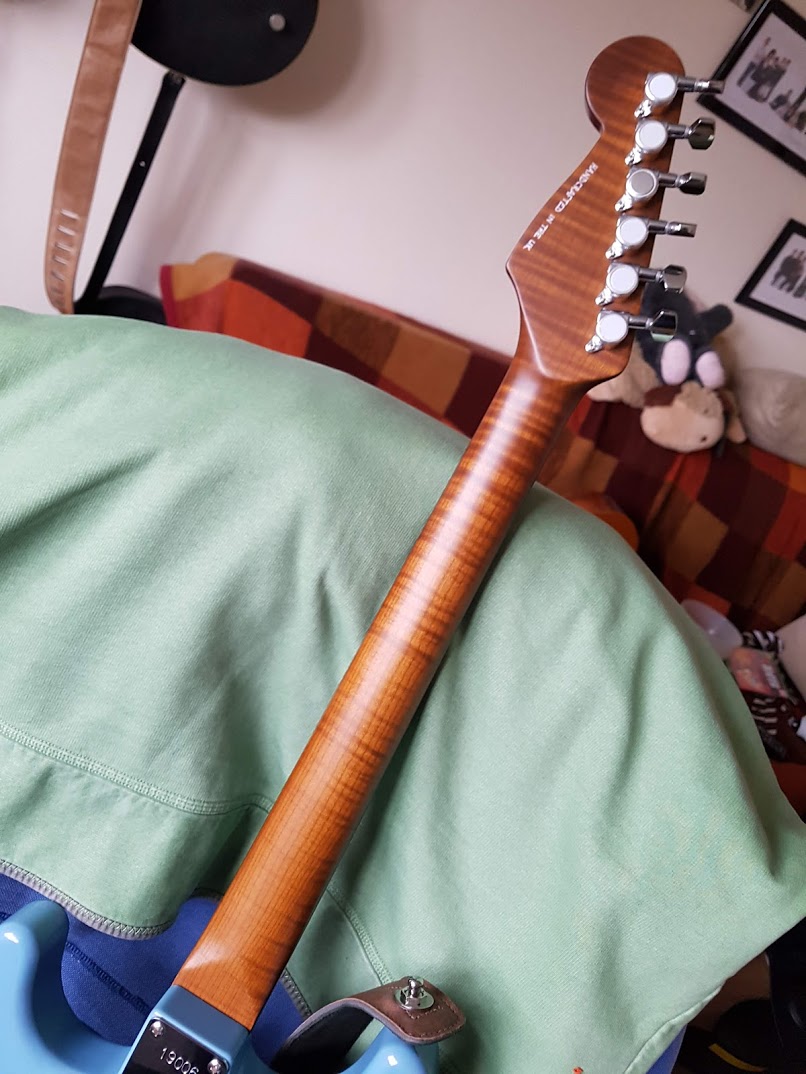 1st problem... the strap locks.  I paid a little extra to get these added, and they're fairly cheap items.  In fact, the depth of them is very shallow, and they barely make it through a leather strap.  I persevered and they're on - but I'll probably swap them out at some point for something that feels a little better.

Then the second - how it sounded. Even before I'd ordered the guitar, I'd resigned myself to having to replace the pickups on this anyway (I'm a snob like that - have a variety of aftermarket pickups, Bare Knuckle, Mojo, Bulldog).  My problem is that I'm bench marking this against my bitsa strat with Mojo pickups, which sounds AWESOME.

Despite being initially disappointed with the sound in the first few days, I've since revised my appraisal of the pickups.  The issue was more my lack of understanding the guitar, rather than the guitar itself.  Pretty much all the guitars I've owned work with the controls at 10.  This guitar doesn't; from a tone perspective the bridge and the neck controls need to be set anywhere between 5 and 8 to sound how I'd expect them to.  But the variation in tones within those ranges is amazing; not fully stratty, but excellent nonetheless.  I think I was expecting this guitar to be the strat above all, which it isn't - but it's definitely got it's own idiosyncratic character, which is exactly what I was after, going with a brand like GS.  I'm wondering now if the tone pots are no-load resisters; don't think I've ever had those in a guitar, but it sounds like when fully open they may be out of the circuit.

Then my high E string broke.

Changing strings highlighted another issue - the tuners.  Again, locking tuners were an upgrade option, and these units are not great.  Two string retainers are also used (these are the tree type, very grippy, not great for trem use).  Because the locking tuners are fairly poor, they failed to grip the strings properly when fully tightened.  This had been compensated for by winding the string around the post to secure it, kinda defeating the object of having locking tuners in the first place.  The cheap tuners combined with grippy retainers led to poor tuning stability.  And they're sharp - hence the break.

New tuners and string retainers were ordered and this is the result. 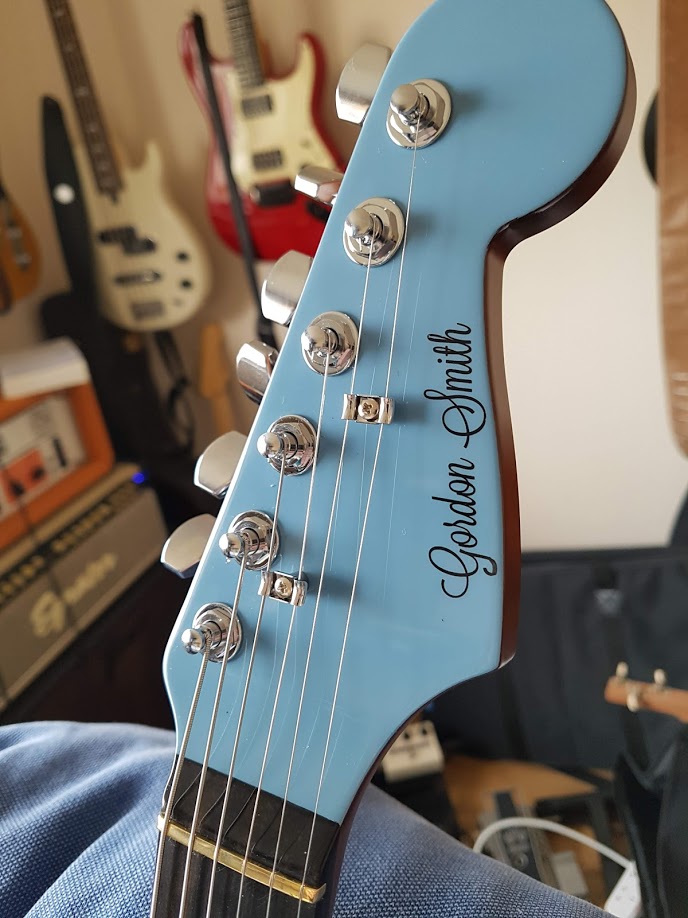 At this point, I'll give a wow - the new Gotoh tuners have made an immense difference.  Not just to the tuning stability, which it now has, but also to the resonance of the overall guitar, and the balance of each string.  Was good before, now really great.  I guess it must be to do with the string angle... the new tuners are staggered.  I wouldn't have thought it would make a massive difference, but it does.

I kept the original string retainers - the new ones I bought had a lug that I'd need to drill a new hole for, so I thought I'd try the originals with the new tuners, and they work perfectly.  The irony is that with better tuners, the guitar probably wouldn't have needed the retainers anyway.

While on the subject of hardware, the trem doesn't seem to be branded, but is fine.  Works well, feels solid. 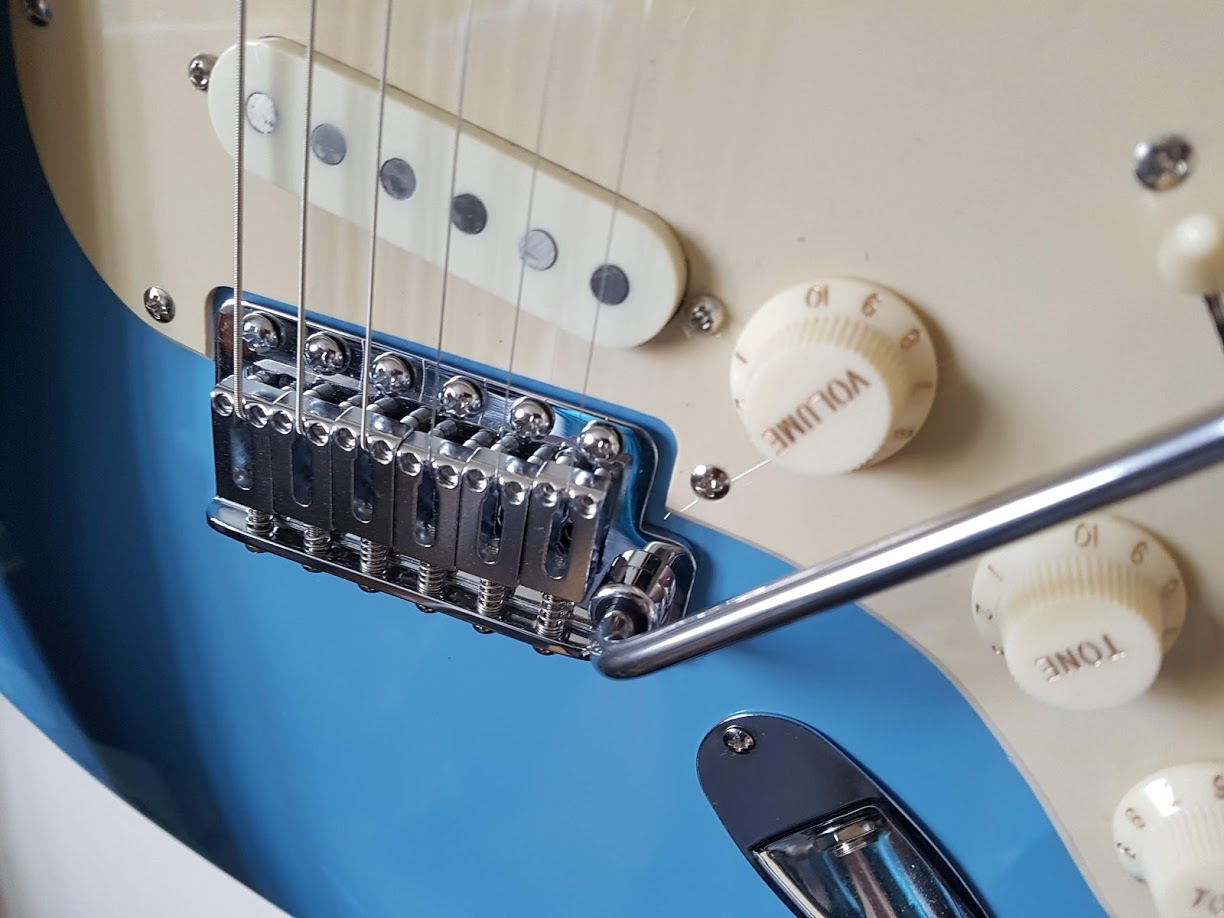 Gordon Smith/Auden as a company?  I'd give them 10 out of 10 for customer service, engagement, and general all round ease of use.  They were a breeze to deal with, and despite the niggles with the guitar, I still feel that I've got an awesome, quirky, unique musical instrument as a result.  For the price I could have got a decent American made Stratocaster, but this plays better, feels better, looks better (in my opinion) than any I've tried.  The only guitars I played that were close to this one in terms of feel and playability were by G&L and MusicMan.  I've played an LSL that was the better part of 3 grand, and my Gordon Smith feels nicer.  The neck is to die for, the stainless steel frets really are a proper upgrade. It's let down somewhat by the cheap hardware, but none of that is insurmountable, and in fact the upgrade thing is kinda fun...

It's a cool, characterful, unique guitar, with an incredible range of tones.  It has mojo.

Would I buy Gordon Smith again?  Absolutely yes, despite the challenges with some of the cheap hardware.  In hindsight I should have been more directive in the level of hardware quality that I wanted - specifying exactly what I wanted installed.  Although that said, it might have taken away some of the fun of owning this quirky guitar...

I have a hankering for a Gordon Smith SG with P90s... Maybe when my wife lets me have another guitar I'll visit Northampton again. 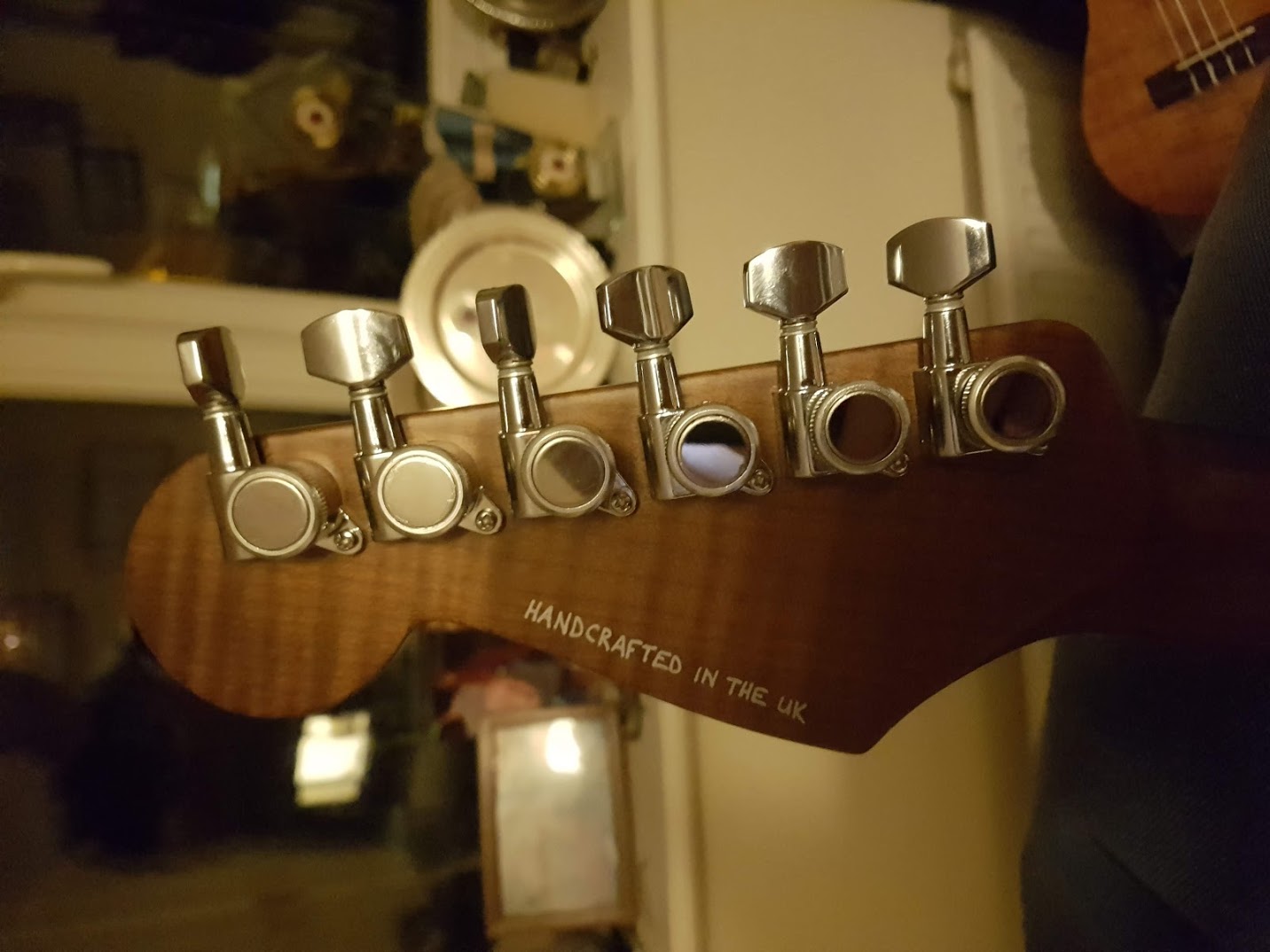 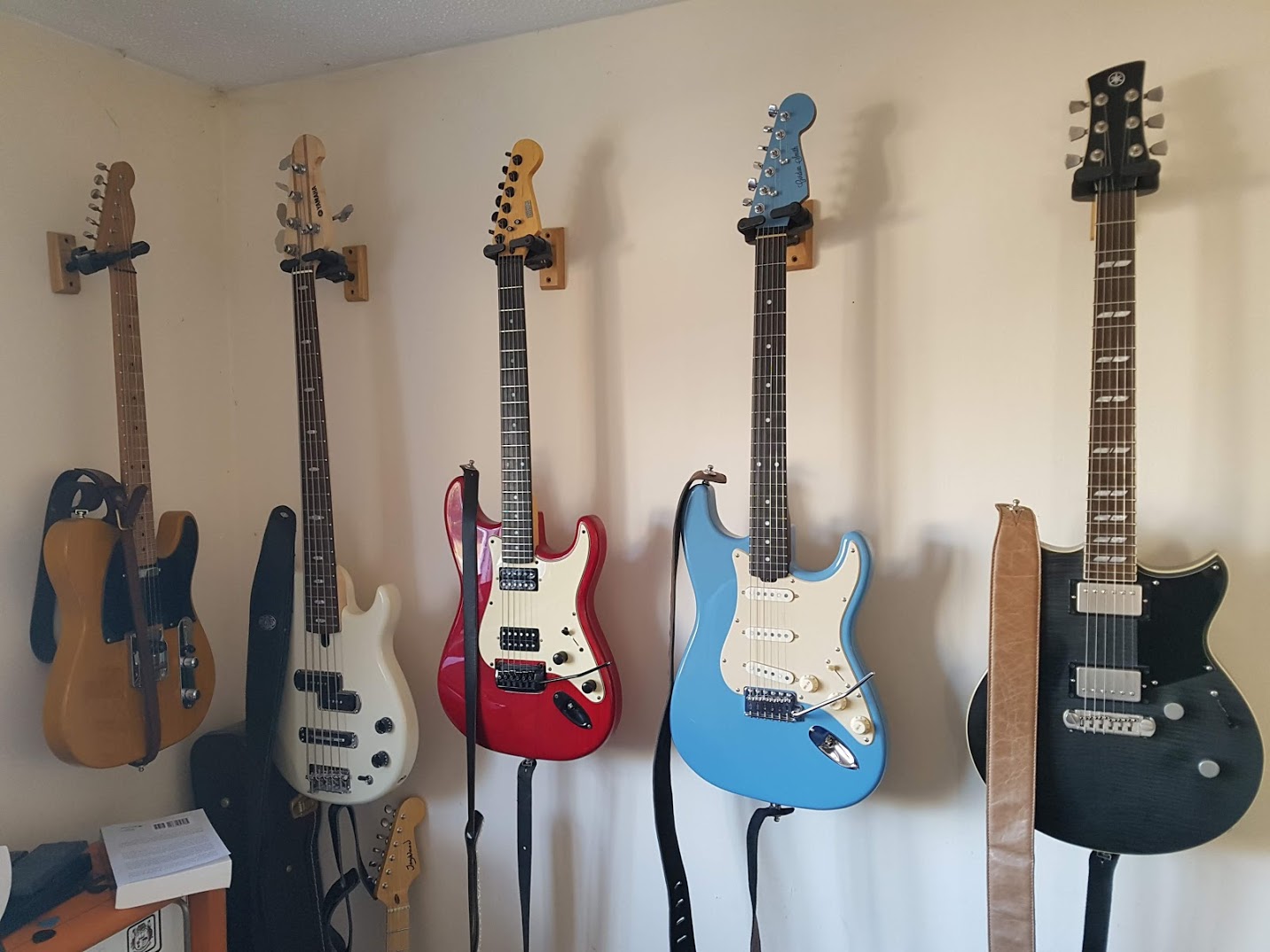